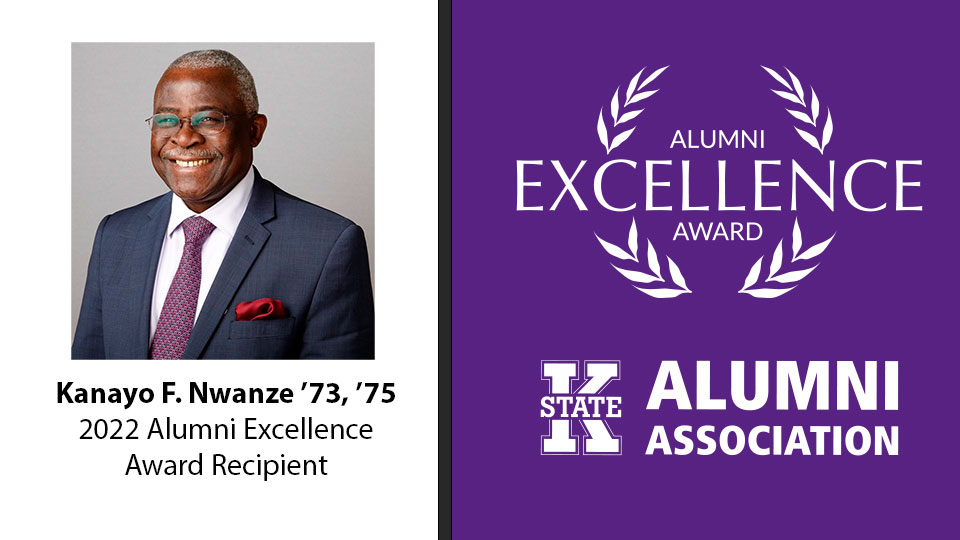 The Alumni Excellence Award is an annual award recognizing an alumna or alumnus of K-State whose career, service and achievements exemplify the spirit, values and excellence of the university.

Nwanze has over 40 years of experience across three continents in poverty reduction through agriculture, rural development, and research. Nwanze also introduced and promoted a new rice for Africa which is a high-yield, drought and pest-resistant variety developed specifically for the African landscape.

In his nomination, Svein Tore Holsether, president and CEO of Yara International, described Nwanze as an “outstanding African leader who has dedicated his work to improve the lives for small holder farmers. With 80% of farms run by small holders, the key to transforming African agriculture lies in improving the small holder farmer, enabling rural value creation, and providing jobs for rural youth.”

In 2016, Nwanze was awarded the African Food Prize for his work. He dedicated the prize to “the millions of African women who silently toil to feed their families.”

“The Alumni Excellence Award exists to celebrate and showcase our K-State alumni for their contributions to society,” said Amy Button Renz, president and CEO of the Alumni Association. “Dr. Nwanze has shown the tremendous impact a K-Stater can have on the world. Through his efforts, he has helped countless people in Africa feed their families and improve the quality of life for small holder farmers. We are thrilled to honor him.”

The Alumni Excellence Award is made possible by the generosity of the Curt and Sherry Frasier family of Beloit, Kansas. Both are 1973 graduates of K-State. For more information about the awards programs, visit www.k-state.com/awards [1] or call the K-State Alumni Association at 785-532-6260.

_Established in 1874, the K-State Alumni Association is dedicated to providing lifelong connections, programs and services for its members.___