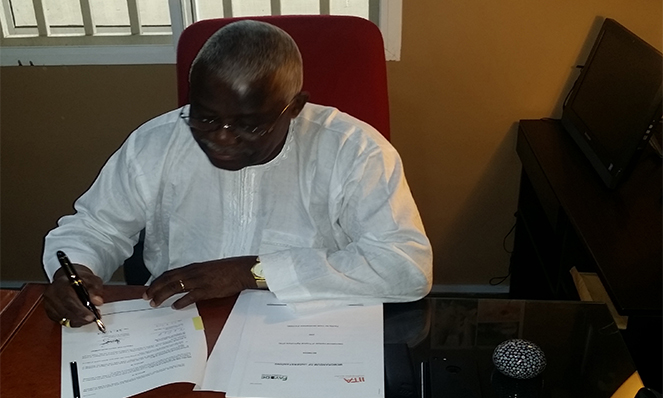 FAYODE sees a future where rural young women and men develop their entrepreneurial skills, become dignified and self-employed, and become employers of other youth, to sustainably contribute to the economy and social fabric of their communities. FAYODE will thus become a platform that brings joy to rural lives.

To this effect, members of FAYODE Working Group on Monday, August 28, met at the International Institute of Tropical Agriculture (IITA) in Ibadan to explore areas of strengthening the partnership that exists between the two organizations and finalise the design and approach for the implementation of the initiative.

The meeting chaired by Dr Kanayo Nwanze- the Chairman and Chief Executive of FAYODE also served as a means of formalizing the relationship and partnership existing between FAYODE and IITA.

Welcoming the FAYODE team to IITA, the Director General, Dr Nteranya Sanginga expressed the institution’s willingness to partner with FAYODE in the implementation of the Facility. Dr Sanginga stated that Dr Nwanze’s passion for the issues of rural and youth development has aided the birth and growth of IITA’s Youth in Agribusiness initiative.

Prior to the meeting, the team identified and conducted an assessment exercise in July and August at Joga-Orile. Joga Orile, a small community in Yewa North Local Government area in the western suburb of Abeokuta, Ogun State is being considered as the first rural community of intervention for FAYODE.

During the visit to the area, five potential businesses and grantees were identified after which two were selected based on their business prospects, commitment of the business owners and potential impact of additional investments in their businesses in the community. The Facility will provide both financial and technical support to the beneficiaries to enhance their businesses skills and success.

Since then, FAYODE and IITA have signed a Memorandum of Understanding effective September 2018 which will open several opportunities for joint projects, training, staff exchange etc.  This marks a major milestone for FAYODE as the first formal partnership agreement with any organisation.

The team is expected to organise a seminar for the two potential beneficiaries and exposed to the opportunities available to through FAYODE.

A message to the next generation: This is your opportunity. Make sure your voices are heard.
3 Sep, 2020
Stop waiting to get back to normal: We need to build back better – and this starts with transforming food systems
4 Jul, 2020
Kanayo Nwanze to bring voice of One CGIAR to UN Food Systems Summit
21 Apr, 2020
FAYODE extends hands of kindness to the first female grantee of the Facility
23 Nov, 2018
FAYODE explore areas of partnership with IITA
11 Oct, 2018